Early in 2020 we had Storm Donald. We then had a remarkably dry and sunny period during the first Covid lockdown. The summer of 2021 has been one of the wettest in recent years. This is weather, rather than climate, so we need to take a step back to see how overall long term climate change is affecting the wildlife in our gardens here in Bath.

The seasons are shifting

I saw a bumblebee in my garden today at the beginning of November. The queens and worker garden bumblebees (Bombus hortorum) are remaining more active in winter, which means that they will need suitable nectar-producing plants to be in flower.

If you have both frogs and newts in your garden pond, the frogs used to arrive first, which gave their tadpoles a head start over newt predators. Now frog spawning dates have moved earlier,but newt arrival has shifted more. The newts can then compete more effectively against the frogs. The timing of migration for birds like swifis is affected by food availability in sub-Saharan Africa as well as insect populations here. Breeding success can easily be thrown out if the insects aren’t sufficiently plentiful when these aerial speedsters are on the wing all day collecting balls of insects to feed their young.

Species ranges are on the move

The Jersey tiger moth,  very rare in the UK until recently, has been caught in quite a few moth traps in the Bath area in the last few years. But the garden tiger moth is becoming increasingly rare in the south and more common in the north, as the caterpillars are not surviving the warmer winters. The tree bumblebee was first spotted in Wiltshire in 2001 and is now one of our 8 commonest bumble bees. 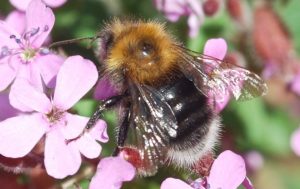 The increased frequency of extreme weather events such as Storm Donald seems to be hindering the recovery of animal populations. For example bumble bee declines are associated with the increase in number of hot days brought about by cllmate change

The brown argus butterfly is charging northwards, averaging 3 km a year. Its caterpillar seems to have widened its diet to include garden varieties of hardy geranium. As always, those species which are very picky about their diet or host plants for their larvae will be more vulnerable to any changes in climate which affect their food source.

Plants and animals which are not very mobile or can’t find suitable habitat at the edge of their expansion range are likely to be losers. Overall there are more losers than winners as there are other factors such as habitat loss and fragmentation affecting species populations. That’s where gardens can provide a stable environment for some of the species at risk.