The bat’s year is nearly over. Soon they will be hibernating for the winter, so September is a good time to catch a glimpse of them after the numbers have built up in the breeding season. A select few walked down Mill Lane in Monkton Combe just before dusk on a dry warm evening armed with bat detectors, torches and curiosity to see what the next hour would bring. 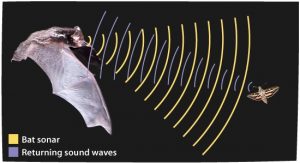 All UK bats are insectivorous and they use echolocation to navigate their environment and hunt their prey, which is often nocturnal insects such as moths and mosquitoes. They do this by producing ultrasonic calls, mostly inaudible to humans, which bounce off objects and return to the bat’s ears, providing them with spatial information about their environment. This allows them to build up an accurate picture of obstacles around them, giving them the ability for example to navigate past branches and under bridges and to accurately target their prey. Bat detectors work by making an audible noise from the very high frequency calls of the bats by mixing it with a ‘carrier’ wave.

The trouble is, with the simple detectors that we were using, you can only tune in to one frequency at a time and a lot of the UK bats have 45 kHz as their key frequency. So we needed to include other information about their behaviour to help us. As we waited for darkness to fall and the first bats to appear, we listened to recordings of pipistrelles, noctules and Daubenton’s bats, courtesy of the Bat Conservation Trust. Mmm, quite tricky – much harder than bird song.

Noctules have a distinctive call with separated notes at 20kHz. We had seen them, flying straight and quite high above the trees a few nights before –  they come out the earliest while it is still quite light. No noctules appeared – every day (or night) is different when you are looking for animals.  But then the clicking, whispering and chirruping began and we were hooked. We could sometimes see the swerving, darting flight of the pipistrelles as they  crossed and recrossed the Midford Brook  – but we could certainly hear it, as the clicks became louder and more concentrated as the bats approached us and then tapered away into a whisper as they circled away.  Daubenton’s bats were spotted flying low, straight and fast along the brook, their reflections showing on the water surface. They  sound like a machine gun with burst of calls lasting 5-10 seconds, feeding close to the water surface as they specialise in midges (hurray!), caddisflies and mayflies. Both these bats have their peak frequency at 45 kHz. But as we moved the dial on our detectors to 55 kHz calls were also coming in loud and clear. This was the soprano pipistrelle, so-called because it was only separated from the common pipistrelle in 1977 on the basis of its DNA and the higher frequency of its call.

We finished with the piéce de resistance – shining a torch beam onto the water and a pipistrelle chose to enthrall us with repeated circular swoops towards us up the beam, its body clearly paler than its wings and the full extent of its wingspan visible.

Bat-like creatures have been around for 50 million years with their echo-location techniques. We were grateful for the technology of recent decades that allowed us to appreciate their ancient arts more fully.